YOU ARE HERE: Home » Topics » Pesach » Does it Matter How we Eat the Matza on Seder Night? Preparing for the Moment

Does it Matter How we Eat the Matza on Seder Night? Preparing for the Moment

A d’var Torah for Pesach by Tovah Leah Nachmani.

Updated!
An new version of the d’var Torah is now available. It was written by Tovah Leah for her “students, friends, and family.” Download it here.

Ms. Nachmani holds a BA in Near Eastern Language and Literature and Religious Studies from Indiana University and a Teaching Certification in Tanach and Jewish Thought from the Israeli “Michlelet Herzog” Seminary in Gush Etzion.

At Pardes, Ms. Nachmani teaches Chumash, Tanach, Prayer and Interpersonal Relationships. She has written and guided experiential learning programs for mothers and their daughters of Bat Mitzva age at the Women’s Beit Midrash in Efrat, where she previously taught Prayer and Jewish Thought.

Ms. Nachmani was a Jewish educator and program director for many years, together with her husband Gabi, for “Livnot U’Lehibanot” (“To Build and Be Built”) in Tzfat and Jerusalem. They co-authored the widely-used song book “Zemirot from Livnot”. Currently she is Assistant Educational Director for “Ayeka” – an international organization training Jewish lay and professional leaders to facilitate “Ayeka” spiritual education seminars for Jews of all backgrounds and affiliations. She believes in learning which connects the mind to the heart.

An Interactive Parsha Experience – 5779 Re’eh: One for All and All for One!

Posted by Pardes Center for Jewish Educators Contributors on August 25, 2019

5779 – Passover Edition: “Eat it on this Night”- The Passover Sacrifice and the Timing of Redemption 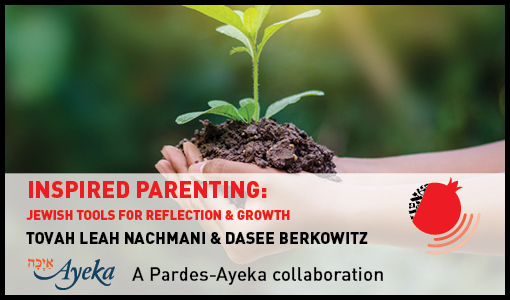 Inspired Parenting Part 4: Sharing the Stories that Shape our Lives