What do you do when life throws you a curve ball and seems to move in a direction all its own, a direction that you neither planned nor desired?

We’ve recently finished reading the parshiot that detail the stories of Yosef and his brothers, watching Yosef’s roller coaster ride down from favored son to slave, back up to trusted servant, down to prison and finally up again to second-in-command in Egypt. Yosef’s life had not exactly played out as expected. Though ruling had been part of his dreams, slavery and imprisonment were definitely not.

So how did Yosef deal with the unexpected?

The answer is quite ambiguous, for though we know many of Yosef’s actions in Egypt, the motivations behind those actions have been debated. After rising to power, why didn’t he immediately send to his father and tell him where he was? Why did he accuse his brothers of spying? Why did he frame his beloved brother Benjamin, accusing him of stealing his magical goblet?

The simplest answer might be to say that Yosef was taking revenge, giving his brothers back a little bit of what they had given him. Though he had ultimately come into power, one part of Yosef could never let go of the past; one part was still angry and bitter about the preceding dark years.

Another possibility is that Yosef was not necessarily angry but rather extremely hurt. He, perhaps, wanted no contact with his father, for any connection to the past was simply too painful. When the brothers arrive in Egypt he tests them to see if they have changed. Will they treat Benjamin the way they treated him ? If he resumes a connection is he setting himself up for further hurt? Prof. David Henschke goes a step further, suggesting that in Egypt Yosef decided to cut all ties and totally assimilate. If he was rejected by his brothers, why not embrace Egyptian culture instead? When the brothers came to Egypt, they were a hindrance and, at first, Yosef preferred to live his separate existence and forget all about them.

An opposing approach (See Megadim 5, p. 93-94) suggests that Yosef’s trials and tribulations caused him to reflect on the past, dwelling not on his brother’s role in his downfall but on his own. Yosef realized that his haughtiness and vanity were as much to blame for the turn of events as his brothers’ actions. He even concluded (erroneously) that the sale was orchestrated by his father as a way to teach him a lesson. In Egypt, he felt unable to write to his father until the latter was ready to forgive him. He set up his brother mainly in an effort to find out whether or not the intervening years had softened his family’s view of him.

One last approach can be found in Yosef’s own words to the brothers. After revealing himself he tells them, “As a life saving force God sent me here… You did not send me here, but rather God sent me here…” At the end of his ordeal, Yosef was finally able to look back on it and find the good that came out of it.

It is quite possible that all the above emotions played some role in Yosef’s actions. At times, he was likely angry and resentful, pained and hurt. At some point he probably wanted to turn his back on all and at some point he probably wanted revenge. And, probably, at some point he did some soul searching and found himself somewhat guilty. But he was also finally able to understand that when life goes wrong, it is sometimes part of some larger Divine plan that we don’t quite understand but perhaps, if we look hard enough, we might be able to find the good hidden inside.

Behar Bechukotai 5781 – Cultivating Tranquility and Calmness of the Heart

Acharei Mot-Kedoshim 5781: The Holiness of the Land 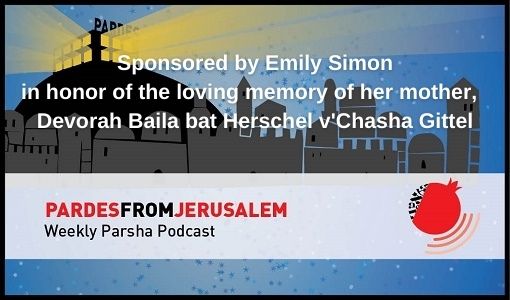 Tazria Metzora 5781 – the Messiness of Life