YOU ARE HERE: Home » Topics » Biblical Times » The Meaning of the Mishkan

The Meaning of the Mishkan

Parashat Pekudei constitutes the final reading of the book of Shemot. It opens with a tally of the various materials contributed by the people of Israel towards the construction of the Mishkan, placing emphasis upon the precious metals. Of special note is the calculation of the silver contribution, for each adult male offered a half shekel for the fashioning of the base sockets of the boards, and thus provided a mechanism for a census of the people to be simultaneously undertaken. The Parasha goes on to describe the fashioning of the priestly garments, repeating material first relayed in Parashat Tetzave, before concluding with an account of the Mishkan’s fabrication as its external envelope was erected and then its sacred vessels were placed in their correct locations. Exultantly, the Parasha ends with the descent of God’s glory, manifest by the cloud, as His presence filled the space of the Mishkan and temporarily prevented even Moshe from entering its super-charged atmosphere. Proleptically, the text then informs us that all of the future peregrinations of the people of Israel through the wilderness were conditioned by the movements of this Divine cloud, for

What a fitting finale to the parashiyot of the book that had so painstakingly (as well as painfully) narrated the account of the birth of the Israelite nation! Recall that Sefer Shemot had ominously opened with the onset of the oppression in Egypt as the descendents of Ya’acov, earlier welcomed as honored guests, were pressed into national service and then reduced to abject slavery. The exodus eventually did follow, after a mighty display of God’s plagues and the first tentative spiritual steps of the people towards freedom, but not in time to prevent the centuries of servitude from leaving their scars on the crushed Israelite psyche. Though they marched forth with a euphoric display of confidence, the traumas that had devastatingly accumulated under the Egyptian yoke – the spiritual lassitude, self-loathing and the terrible fear of embracing their destiny – would remain with them for decades.

Nevertheless, the people persevered, crossing Yam Suf and then entering the foreboding wilderness, all the while prodded by a Divine impulsion that was determined to bring them to Mount Sinai. There, they received the Torah, as God revealed His guiding laws and the people enthusiastically pledged their fealty. At Sinai’s arid and windswept base they remained, the extent of God’s lofty expectations slowly becoming overwhelmingly clear, and after the debacle of the golden calf the people began the project of constructing the Mishkan. The work continued apace for some six months , and finally “on the first day of the first month” (40:17), exactly one year to the day after God had announced to the people while yet in Egypt their impending liberation and had bidden them to prepare the Paschal sacrifice (12:1-3), the dedication of the complex began.

What had therefore started with abject adversity was thus startlingly concluded with triumph, for exile and oppression were changed into exodus and redemption, and awful self-alienation and estrangement from God were converted into budding self-awareness and sincere devotion to His word. The conclusion of Sefer Shemot, so utterly preoccupied with things of space, has a remarkable equivalent in the world of time. The spirit of fateful change that colors the onset of the Purim/Pesach season, marked in nature by the last wet winds of interminable winter that now bow out before the warmer breezes of hopeful spring, is mirrored exactly by this textual theme of astonishing national transformation!

As readers of the Torah we know that many challenges await the people of Israel just over the horizon of Sefer Shemot, many setbacks and disappointments that will delay the process of peoplehood and postpone the realization of the national mission. But the fundamental trajectory of Israel’s course will not be altered. The guidance of the Divine cloud, first introduced here as the conclusion to the Mishkan narratives, will remain as an ever-present force in the people’s lives, even as their childlike exhilaration dissipates and the task of nation building is engaged in earnest.

In many respects, the account of the Mishkan’s fabrication is reminiscent of the Torah’s narrative concerning the creation of the world. In both instances, raw materials were transformed into finished products of utility, beauty and purpose, through the exercise of intelligence and will and by the spark of a creative spirit. In both instances, the process took time and unfolded according to a hierarchical ordering principle that saved the most precious elements for the end. And in both instances, the tangible matter, inanimate and unresponsive, was inspired with a Divine breath that conferred life and sensation. This is particularly evident with respect to the fashioning of the first human being, for the text makes it abundantly clear that his limp and lifeless body, formed of elemental clay, remained inert until God blew into its nostrils “the breath of life, so that the human became a living creature” (2:7). As the Ramban (13th century, Spain) insightfully comments there:

The text means to imply that when God fashioned the human being from the dust of the earth, he lay lifeless like a senseless stone. The Holy One blessed be He then blew into his nostrils the breath of life and he became a living and animate being…(commentary to Bereishit 2:7).

In a similar way, Moshe sets up the building envelope of the Mishkan, now placing the sockets, the boards and the bars (40:18). He raises the pillars and arranges the tent-like curtains as well as the protective covering (40:19). He places the vessels in their exact location – the ark, table, menorah, and golden altar (40:20-27). Moshe then hangs the dividing curtain, before setting up the altar of bronze in the courtyard (40:28). The laver is positioned between the Mishkan and the altar (40:30) and finally the perimeter curtains of the courtyard are set up (40:33). In other words, all of the tangible things – the external protective structure without and the precious vessels within – were placed in their correct location so that the “organism” of the building was finished. But like the lifeless body of the first human – externally perfect, internally ordered with exactitude – the Mishkan lacked the animating spirit that God’s descending cloud finally conveyed:

The Analog of the Ibn Ezra

The analogy first boldly drawn by the Ibn Ezra (12th century, Spain) in his commentary to Bereishit 1:26 now returns with unusual force:

…God forbid that the Creator should have any corporeal qualities or tangible form! Behold the text proclaims “‘to whom shall you compare Me that I might be similar?’ says the Holy One” (Yeshayahu 40:25). Rather, because the supernal soul of man is eternal, it therefore shares an affinity with God. So too the soul is incorporeal and it also fills the whole body with life. The human body is thus like a miniature world. Blessed be God who began by fashioning the great cosmos and concluded by fashioning man, the microcosm!

For Ibn Ezra, there is a parallel to be drawn between God the Creator and the soul of the human being. Absolute God is utterly without body or form, but His eternal spirit of “glory” fills the material cosmos and inspires it with life and meaning. Similarly, though we must regard Ibn Ezra’s words with caution as a provocative metaphor that can convey only part of the matter, the human soul – ethereal and eternal – grants life to the human body, filling it with potential and purpose after the manner of the Creator. And the Mishkan as well, representing the proverbial link between heaven and earth, is thus constructed according to a similar dynamic. We return once again to the laden words of the Ibn Ezra, this time in his discussion of the meaning of the Mishkan, where he advances the explanation of Rav Sa’adia Gaon (10th century, Babylon):

The Gaon explained that there are in fact three worlds. This terrestrial world is the macrocosm, the Mishkan is intermediate, and the human body is the microcosm…(commentary to Shemot 25:7).

While the Gaon goes on to draw specific comparisons between heavenly elements, the items of the Mishkan, and the organs of the human body, occasionally introducing links that are overly contrived or forced, who could deny the overall persuasiveness of his argument? As the text of our Parasha makes so eminently clear, it is only at the moment of descent of the Divine cloud – itself a symbolic and intentionally amorphous manifestation of His overwhelming presence – that the material Mishkan and its tangible vessels come to “life”.

We must ask ourselves what might be the implications of the Ibn Ezra’s and Gaon’s daring theory. Why would the text invite us to compare omnipotent, omniscient and omnipresent God with the Mishkan, and then with the human being? Of course, one important conclusion to be drawn concerns the infinite worth and ultimate value of the individual human being, who is now recast as not only possessing God-like qualities but as a miniature world in his own right. But this message, while certainly critical for a culture that commercializes even the most sacred things and tramples with impunity upon the inviolability of the human being, could have been conveyed without recourse to such bold metaphors. Had the Torah not already indicated that the human being was the crown of the cosmos, fashioned at the climactic end of the creative process in “the image of God”? Why the necessity of drawing challenging parallels that could be misconstrued as suggesting limits to divine transcendence?

Ibn Ezra’s intent is perhaps something else entirely. Often we make the mistake of believing (or do we convince ourselves?) that an intimate relationship with God is impossible. How can one relate to a being that is absolute and unfathomable? How can one come to terms with unending space and eternity in time? What common ground do I share with the creator of heaven and earth whose “glory fills the cosmos”? And what could be the meaning of His preoccupation with individual human lives and their pettiness, with detailed ritual and minutiae, with laws that strike us as overly exhaustive and small-minded?

The answer, according to the Ibn Ezra, is that we share a natural affinity with God, for the very makeup of our being somehow parallels Him. We therefore need not resort to contrivance and artificiality in forging a relationship. A cohesive connection between us and the Deity, though sometimes difficult to believe, is actually an innate feature of our own existence. Our soul longs for a profound bond with God and nothing could be as straightforward. And as for His laws – the Mishkan and its precious ark of the covenant that is the location in space from whence His commands emanate – they constitute the natural link between us. The divide between heaven and earth can be effectively bridged by the word of God that stands in between. The laws that focus our attention even upon the small and seemingly insignificant, parallel absolute God’s own involvement with the material universe at large, for “His care and compassion extend to all of His creations” (Tehillim 145:9). The Mishkan is the intermediate world, the link between finite man and Infinite God, and by its service and the instruction communicated from within its holy precincts, we can yet stand in the presence of God.

Vayakhel Pekudei 5781 – The Altar of Sacrifice

The Parsha Discussion with Alex Israel — Vayakhel-Pikudei. Together and Apart 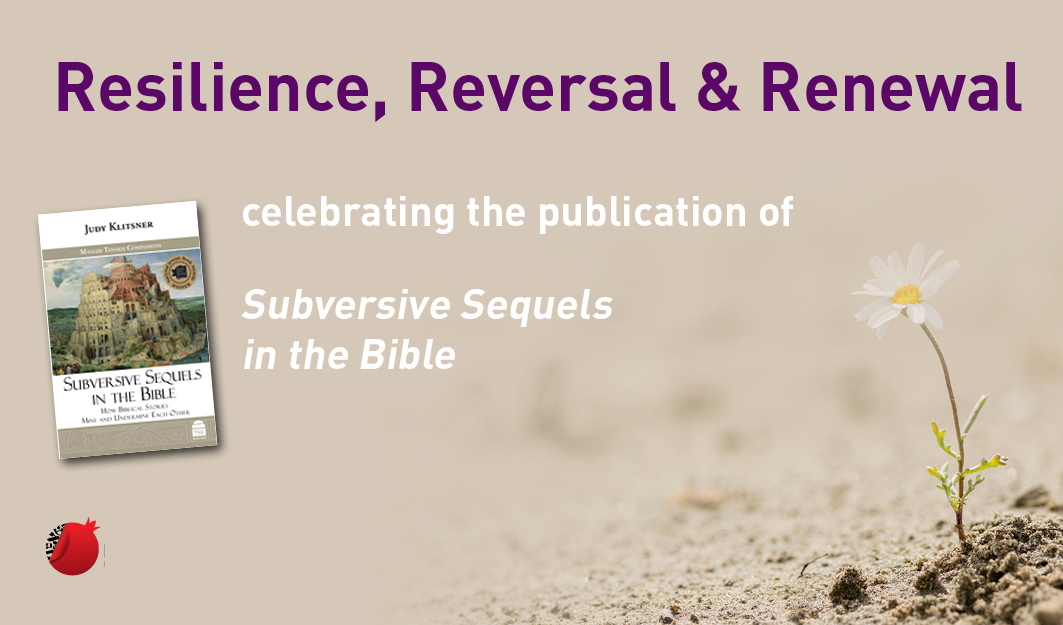