YOU ARE HERE: Home » Topics » Women's Issues » Living in Harmony

The Mishnah teaches that one must strive to live harmoniously by actively acknowledging and respecting the feelings of others as individuals worthy of respect, for they too are created in the image of God. The last Mishna in the fifth chapter of Gittin, a tractate that deals with divorce law, a paradigm example of the breakdown of human relationships, outlines a number of behaviors one must do :mi-p’nei darkhei shalom (“in the interest of peace”). It states:

[2]  The wife of a ḥaveir [member of the elite rabbinic faction who is scrupulous in the observance of ritual purity and tithes] lends to the wife of an am ha-aretz [one who is suspect of transgressing the laws of ritual purity and tithes] a fine sieve, or a coarse sieve, and she may winnow or grind or sift with her; but when she [the am ha-aretz] pours the water she [the wife of the ḥaveir] must not touch it [i.e., the formed dough] with her [as water is a conductor or impurity], because one does not strengthen the hand of those that transgress—and all these have only been said for the interest of peace.

[3] And they strengthen the hands of non-Jews in the Sabbatical year [by blessing their labor for success] but not the hands of Jews, and one greets (sho·alim bi-sh’loman) them [i.e., non-Jews]—in the interests of peace.

Within Jewish law and community, women are often considered to be on the sidelines of society; but in this text, women become a reflection of the community as a whole. Even though (or possibly because) the sphere of women, in mishnaic times, is in the home attending to domestic chores, they have strong neighborly and communal relationships that can be a model for all. A way of categorizing members of the Jewish community may be according to their level of religious practice and adherence to Jewish law. Inevitably, those who are punctilious in the performance of mitzvot are well aware of those who they deem to have a lesser commitment to law than they do. In modern times, this often leads to creating distance and separation; the different groups do not socialize and may not live in the same neighborhoods. Yet here, one finds two examples of interactions with Jews who do not follow halakhah as the rabbis of the mishnah would desire.

At [1] the text describes a woman suspected of not following the rules of the Sabbatical year, and at [2] the case presents a woman who belongs to a group other than the ḥaveirim, the elite rabbinic faction that is scrupulous regarding observance of ritual purity and tithes. The woman is married to an ignoramus, an am ha-aretz—a member of a group that the rabbis generally did not trust to keep the laws of purity and tithes correctly. In both cases it seems that the women of the rabbinic community live close to—either next door or on the same courtyard—these other less observant Jews. In fact, the woman in [1] who is suspected of transgressing the Sabbatical year is referred to as “her friend,” ḥavertah—a word from the same Hebrew root as the ḥaveirim, the very elite rabbinic faction mentioned in the following law, at [2]. The text instructs observant women to maintain neighborly ties and lend cooking utensils to these other women, just as long as they themselves do not transgress the law and aid in any prohibited actions. In the interests of peace, the observant woman is permitted to share her utensils—even though she knows that most likely they will be used to aid her friend in transgressing the law, and she may even do some of the actions with her friend, depending on the situation. However, the observant woman may not actively assist her friend once the baking process reaches a point where she, herself, will participate in transgressing the law. Not only is there is no requirement to reprimand the other for transgressing, but the mishnah’s desire to prevent embarrassment or upset (which might occur if one were to refuse to share or help a neighbor) far outweighs the worry that it may look as if one is sanctioning a transgression.

The mishnah ends by discussing interactions with non-Jews, continuing to focus on the fact of religious differences between people. Non-Jews are not bound by Torah law and therefore unlike Jews, are permitted to work the land during the Sabbatical year, and so instead of looking distastefully at this behavior, Jews should verbally encourage and support them in their work. The whole unit concludes with the idea that one should inquire after the well-being (shalom) of the non-Jew[1]. The theme of peace is doubly reinforced in this last case, as the Hebrew idiom for greeting people is to inquire about the “shalom” of another: How are you? Are you at peace? Indeed, the word shalom itself is considered by the rabbis to be one of God’s names (B.T. Shabbat 10b). To inquire about someone’s well-being, to really see another person, is in fact to acknowledge the divine image imbedded within all human beings (Genesis 1:27). With these laws done in the interests of peace, the Mishnah teaches that the same high standard of human interaction that one might naturally give to those similar to oneself, must also be afforded to those with different religious beliefs and practices.

[1] This rule also appears in two other places in the Mishnah: Sheviit 4:3 and 5:9 (and the latter is in fact a word-for-word repetition of M. Gittin 5:9, in its entirety). It is not the case that it was forbidden to greet non-Jews; just there was no mandated practice requiring that it be done until the rabbis instituted that it should—for the interests of peace. Based on mishnayot that appear earlier in the tractate—such as 4:6 (which discusses captives and religious objects taken and ransomed by non-Jews), 4:9 (which discusses Jews who either sell themselves [as slaves] or alternatively their fields to non-Jews) and 5:6 (which deals with land confiscated by non-Jewish rulers)—one can imagine that in many cases, relationships with non-Jews during this time period could well have been very strained and filled with strife.

Rahel Berkovits is a senior faculty member at the Pardes Institute of Jewish Studies in Jerusalem, where she has been teaching Mishnah, Talmud and halakha for over twenty years. Rahel lectures widely in both Israel and abroad especially on topics concerning women and Jewish law and a Jewish sexual ethic. She is the Halakhic Editor and a writer for Hilkhot Nashim the Jewish Orthodox Feminist Alliance’s Halakhic Source-guide Series, recently published by Koren Publishing. Rahel is a founding member of Congregation Shirah Hadasha, a halakhic partnership Synagogue, and serves on their halakha committee. In June 2015, Rahel received Rabbinic Ordination from Rabbis Herzl Hefter and Daniel Sperber. Click here to read more.

Hasidut Track: “Pesach” not passing over 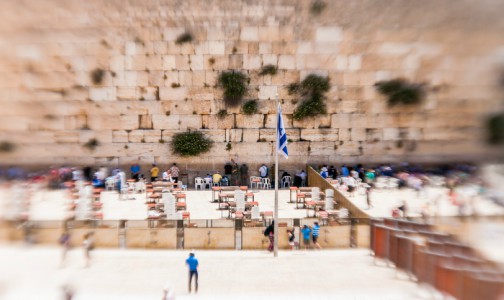 The Three Weeks: The Pull and Power