YOU ARE HERE: Home » Topics » Conversion » The quintessential convert

Why did Jethro need to embrace even more responsibility? 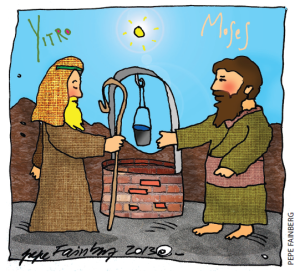 YOU HAVE to hand it to Jethro (Yitro) – he is a very good listener. He hears his daughters’ rushed report about a strange savior at the well and manages to get Moses to be part of his household; he listens to Moses speaking of his need to return to Egypt to free his brethren and allows Moses to take his daughter and grandchildren to that furnace of slavery; Jethro listens carefully to Moses’ inside story of the Exodus, senses his tiredness and overhears the complaints of petitioners seeking justice at Moses’ overcrowded door; and then goes about (re)forming the Hebrew judicial system.

And more. “Jethro the priest of Midian, the father-in-law of Moses, heard all that God had done for Moses and for Israel his people, and that the Lord had brought Israel out of Egypt… [and] Jethro, the father-in-law of Moses, came.” The Talmud teaches that he “came” – that he arrived and converted to Judaism (Midrash Shmuel). What did Jethro hear in addition to the Exodus itself (“all that”), which inspired him to convert?

Rabbi Elazar the Modite said: [It was] “the giving of the Torah he heard about, and he came…” (Mekhilta Exodus 18). But we still need to determine what was crucial in his hearing about Sinai – the event that either was about to happen or, if we follow the rabbis’ frequent disregard for chronology, had just taken place.

On the surface, Jethro did not need Sinai. After all, our tradition (Tractate Sanhedrin and Maimonides’ Laws of Judges) maintains that from early Biblical times, the peoples of the earth already had seven Noaḥide Laws incumbent upon them: the prohibitions of idolatry, “blessing” God, murder, theft, adultery and incest, eating a limb from a live animal, and the positive command to set up courts of justice. Further, “the righteous gentile has a share in the world to come.” So why did Jethro need to embrace even more responsibility?

The Noahide Laws provide for the creation of a rational, nonviolent and peaceful society. It is a whole lot better than savagery, but as a system it is a cold minimum, lacking narrative and a plan for living. It does not have the positive commandments that highlight the Decalogue: “I am the Lord thy God who has taken you out of the Land of Egypt” (1), “Remember the Sabbath to make it Holy” (4), and “Honor thy father and mother” (5). These three commandments orient the Jewish way of life. One, the covenantal pronouncement “I am the Lord” creates a special relationship between God and Israel. Four, the Sabbath is a “sign between Me [God] and the Children of Israel.” For the rabbis, it is a manifestation of Israel’s uniqueness, holiness and commitment to monotheism. And five, the strongest vehicle for Judaism’s continuity is a protected parent-child relationship, which the rabbis extend to other members of the family.

My experience as a rabbi is that when converts are honestly attracted to Judaism it comes from a combination of these three commandments. They are drawn firstly to the Shabbat experience, as a holy day set aside for material well-being and spiritual inspiration, celebrated most of all within a warm, happy familial context. As they progress in their Jewish journeys, they are entranced that Judaism proclaims a path in history; that it is not only a cycle of ritual and human regeneration but also a linear progress from slavery to Exodus; from that physical redemption to Sinai, and from that spiritual salvation to the final freedom at the end of days for all.

Is this what Jethro deeply heard behind the sounds of those tunes at his daughter and son-in-law’s Shabbat table – the music of song, of family togetherness and joy, of marital intimacy, and of human freedom and a taste of the end time, of transcendent being? Shouldn’t we first and finally ask our potential converts, besides interrogating them on what they believe and what they do, what they want to hear at their Shabbat table, if and when they are converted?

I sat on such an Orthodox Beit Din, the Los Angeles Court, presided over by the great scholar Rabbi Samuel Katz. Under his guidance, we indeed posed penetrating questions of belief and behavior in conversion hearings.

But Katz would often simply ask, “What type of Shabbat table do you want?” And the potential convert’s body would relax, their head would lift up, and with a smile s/he would lean forward and speak words of love and hope. Then we would know we had our Jethro.

The Parsha Discussion with Alex Israel — Yitro. Can we curb our desires?