While this week’s parsha, VaYishlach, includes some of our tradition’s high-points (Jacob struggles with an angel and prevails! Jacob’s name is changed to Israel and he is blessed with land and progeny!) as well as some of its low-points (the rape of Dinah; Reuben sleeping with his father’s handmaid, Bilhah), my favorite verse in VaYishlach is probably one of its most overlooked and underrated ones:

Deborah, Rebecca’s nurse, died, and was buried under the oak below Beit El; so it was named Alon-Bachut (the Oak of Weeping).

I take such pleasure in this verse because, in just 14 short words, among so many stories of family opposition and devastation, a real love story is told. 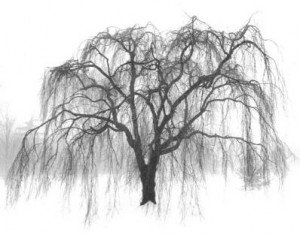 Who was this Deborah? Why does the Torah, which so often doesn’t take the time to record the names – let alone the stories – of mothers, daughters, women, break off for a moment from the momentous tales of Jacob and sons to record the death of one woman and the bereavement that took place surrounding her passing?

We are told in Genesis 24:59 that when Rebecca left her father Betuel’s house forever to go marry Isaac, whom she had never met, she took along with her “her nurse.” We are not told this nurse’s name, and we don’t hear of her again throughout her life. We can only imagine that for Rebecca, in leaving her home and family and traveling thousands of miles away to a foreign land, having her beloved nurse with her must have served as a necessary comfort and even a lifeline at times. We can certainly imagine that the nurse stood in as a mother figure to Rebecca and also the grandmother figure to Jacob and Esau, whose real grandmother Sarah had died long before, and whose other, nameless Mesopotamian grandmother (Betuel’s wife) was never someone they planned on seeing again. We can even imagine Isaac, who had been so attached to his mother Sarah and who only began to come out of the grieving process after she died when he met his wife-to-be, Rebecca, loving this maternal figure in his household. (Like a mother-in-law/son-in-law relationship, but without the angst!) Thus, “Nurse,” as she might have been called – in my mind’s eye at least – might have played a hugely significant nurturing role in the nuclear family of Rebecca, Isaac, Jacob, and Esau.

The classic commentators, including Rashi, Ramban, Radak, and Hizkuni, also come up with varied ideas about Deborah and her connection to Jacob. Some say that after so many years of Jacob being away from home, Rebecca decided to fulfill her promise to “fetch [him] from there” (Genesis 27:45), and so sent her faithful nurse back to Padan Aram to get Jacob and bring him home to Canaan. After that arduous back-and-forth journey, commentators say, the older woman died of exhaustion upon the return to Beit El, and so the entire family mourned their loss under the “Oak of Weeping.”

I imagine it differently. I think Rebecca knew that her favorite’s son stay in Padan Aram was going to last a lot longer than the short “while” she told him he would be there for. So, just as she had brought along her trusted mother figure with her on her life-long trip to Canaan, she knew that in this journey back to the alte heim Jacob was going to need someone to go along with him – someone who could navigate both the terrain and the treacherous ins-and-outs of life with his wily Uncle Laban. And thus, I imagine, perhaps Rebecca sent her beloved Nurse along with Jacob for his more than 20 year stay in Padan Aram. I envision her giving Jacob advice about courting Rachel; I see her present at the births of all of Jacob’s children; I picture her helping Rachel and Leah choose names for their boys and girl; I see her advising Jacob that, after so many years away, it was finally time to go.

And when she died on that last leg of the journey, the entire clan stopped – as did the Torah text itself – to weep over their beloved Nurse. Who finally has a name. Deborah.

5780 — Vayishlach: Looking Failure in the Face

Posted by Pardes Center for Jewish Educators Contributors on November 18, 2018

Vayishlach: The Ethics of Violence