YOU ARE HERE: Home » Topics » Esther » Did Esther & Ruth Break the Glass Ceiling?

Meesh: Back then, the ceiling was not glass, and I don’t think Esther or Ruth made any attempt to break it. Esther and Ruth symbolize the most disempowered of our society. In addition to being women, Esther is an orphan, Ruth is not only a widow and foreigner but also a Moabite, the most alienated of the gentile nations. Significantly, even these disenfranchised women are able to bring redemption to the Jewish people: “the stone that the builders rejected has become the chief cornerstone.” (Ps. 118:22) This reflects the great egalitarian power and responsibility that each of us, no matter our “station,” has to contribute to our nation. But their achievement does not mean that women are empowered. Esther and Ruth used the limited tools in their arsenal to bring redemption to the Jewish people – first and foremost, their sexuality. What is remarkable is that despite the refrain “all the honor of the princess is within” (Ps. 45:12) so frequently cited in our day, the Bible and the Rabbis celebrate this blatant use of sexuality when necessary. This complex relationship is important for us as moderns as well. After their heroic acts, both women return to their confined roles. It is Mordechai who becomes Achashverosh’s right-hand man, and in classic levirate form, Naomi rather than Ruth seems to get the credit for parenting Obed, as Ruth retreats to the background. Fortunately, I don’t see that retreat as necessary for women in today’s world.

Yaffa: I must disagree with my esteemed teacher and havruta Meesh. In my opinion, both Esther and Ruth showed incredible leadership skills, and did not simply use their sexuality to save or advance themselves.

In Esther’s case, we are told that as she entered the palace she was taken into the custody of Hegai, the king’s eunuch. The Megillah says, “And the maiden pleased him, and she performed kindness before him…” (Esther 2:9). The same words are later used to describe her relationship with the king in verse 17. It is very unlikely that the kindness, or hesed, that is described here is of a sexual nature, as we are discussing her relationship with a eunuch, which is, at least in theory, supposed to be platonic. In other words, Esther was charismatic and politically savvy. The fact that the text later describes her relationship with Achashverosh in the same way signals that there was some kind of political and emotional wherewithal to Esther that went far beyond the bedroom.

In the case of Ruth, while I agree that she used her sexuality with Boaz, her real moment of triumph does not come from her relationship with a man. Ruth’s real self-awakening happens when she refuses to turn away from her mother-in-law. It could be out of deep love and respect for Naomi, or it could be her understanding that there is nothing for her back in Moab, but when Ruth declares “for wherever you go I will go; and wherever you lie, I will lie; your nation is my nation and your God is my God” (Ruth 1:16) she is effectively taking her life into her own hands, and as Rav Soloveitchik said, becoming a “person of destiny” rather than a “person of fate.”

I would argue that both Ruth and Esther broke the glass ceiling, in that they both took matters into their own hands, knew themselves and their capabilities, and refused to simply accept what the world told them to do and who to be. While today the world seems to be completely open to women, many still choose to take the roles that are auxiliary rather than central. The world will change when more women stand up, recognize their power and take matters into their own hands – refusing to be defined by those around them – following in the footsteps of our matriarchs Ruth and Esther.

Meesh: I certainly agree that Esther had cunning and savvy and Ruth sheer dedication and love. Esther and Ruth did not just use their sexuality. But they also used their sexuality, and shamelessly to boot. When Esther puts on her finery and stands at a distance before the king to find his favor, she is using her sexuality (Esther 5:2). When she refrains from making her plea directly and invites the king, not once but twice, to a banquet together with Haman, eliciting jealousy and an air of mystery and unavailability (Esther 5:4-9), she is using her sexuality with genius. I don’t think we should whitewash or apologize for this! Recognizing women’s sexuality as a blessing rather than something that needs to be cloistered or shunned would be an important step in many modern Jewish communities.

Similarly, we should celebrate Ruth’s very feminine dedication to her fellow women (her mother-in-law no less!). Women’s special capacity for love, loyalty and nurturing are among the feminine tools that need to be welcomed with open arms in today’s Jewish community. Today’s female leadership has a much larger toolbox to contribute to the Jewish world, including unprecedented levels of Torah scholarship, economic power and official recognition. However, as the Jewish world formally embraces women’s leadership, we are not just more equitably sharing power and stepping into traditionally male roles, but we must also welcome and integrate a new set of uniquely female talents and perspectives, be they female sexuality, love or the ability to cajole with words rather than fear.

I am filled with wonder and thankfulness as I see what newly ordained Maharats have brought to the Orthodox world. Once congregations hire female authorities they are quickly coming to wonder how they ever managed without them. It is thrilling for me to watch this process happen in our lives as well. Although I have been teaching at Pardes for 15 years before being granted a formal title of religious leadership, I am amazed to discover the ways that title has changed peoples’ perception of me. I don’t know if it is giving me the power to break through the glass ceiling, but like the grapevine in my garden, I do think we are managing to reach the roof garden by way of the open window.

Yaffa: I appreciate that sexuality and femininity are important tools for women to inhabit and utilize. And I am grateful that the toolbox has grown so greatly for Jewish women, and that women’s learning, legal reasoning and analytical skills are being lauded in our world.

However, I must take issue with the idea that there are “uniquely female talents and perspectives.” I am wary of limiting deep friendship, sexuality and love to women, and thinking of them as female characteristics. Indeed, I long for a day when both men and women are able to think deeply about sexuality and relationships and are truly able to inhabit their own unique strengths irrespective of sex or gender.

As the Talmud says, “Blessed is He who is the wise knower of secrets, for the mind of each is different from that of the other, just as the face of each is different from that of the other” (Bavli Berachot 58a). Each one of us has a unique gift to give to the world and has our own set of strengths, talents and skills. Thank God, the world is starting to recognize that women are among those who can lead us and teach us how to be better Jews and better people. But we cannot be complacent. We must continue to tear down the barriers that keep both women and men trapped in gender stereotypes and encourage everyone to find the fullest expression of themselves.

Ruth & Esther: From Rags to Royalty is the theme for the summer Pardes Executive Learning Seminar, July 2 – 6, 2016 in Jerusalem. To book, visit www.pardes.org.il/executive.

This article was originally published in Havruta Magazine 2015.

Rabba Yaffa Epstein serves as the Director of Education, North America for the Pardes Institute of Jewish Studies. She received Rabbinic Ordination from Yeshivat Maharat and holds a Law Degree from Bar-Ilan University. She has studied at the Pardes Kollel, the Advanced Talmud Institute at Matan and the Talmud Department of Hebrew University.

Rabbi Meesh Hammer-Kossoy teaches Talmud and the Social Justice Track at Pardes. Originally from Washington, D.C., Meesh has a B.A. in Near Eastern and Judaic Studies from Brandeis University, and a M.A. and Ph.D. from New York University. In 2015, Meesh completed her studies at Beit Midrash Har’el and received ordination from Rabbi Herzl Hefter and Rabbi Daniel Sperber. 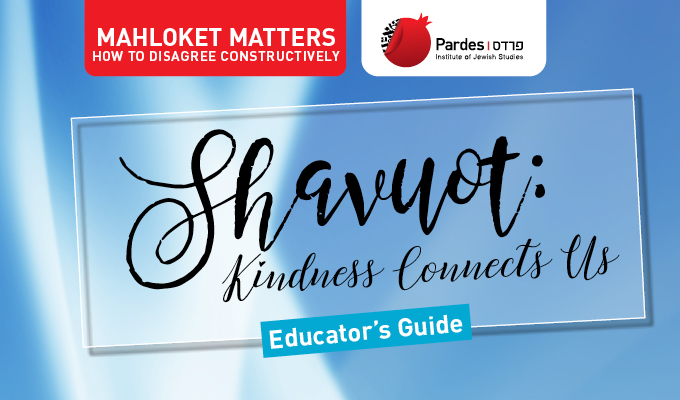