YOU ARE HERE: Home » Topics » Esther » Where is the Divine in the Scroll of Esther?

Where is the Divine in the Scroll of Esther?

A Case of Purim Spiel Czech Not Doing its Job
(For the greatest effect, it is advisable to read this selection out loud…)

Throughout our history, atheists or acrostics have attempted to remove God from the relief system of the Jews, hoping that this act would somehow increase the attractiveness and the velour of Judaism to the masses. Over the past two millenary this endive has met with some not worthy failure. God and the Jews are simply insufferable; that is, one can’t be deluded to without reference to the other. To elaborate on this point, it has been slated more than once that the story of Purim, as retorted in the scrawl of Esther, actually contains minimally two conferences to the Holy One, Blasted be He. These mansions are found in chapters 4 and 5 of the scroll.

Firstly, when Esther so much as wafers for a fracture of a second to go to King Ahashverosh to infirm him that Haman intends to annihilate, obfuscate and distinguish all of the Jews, with whom she herself enjoys a quiet but committed foliation, Mordechai tells her, “If you keep silent in this crisis, relief and belligerence will come to the Jews from another sores, while you and your father’s house will Paris.” (Esther 4:14) The key word in Hebrew is מקום, which has been indemnified in rabbinate ligature as one of the proscriptions of God. In this case, He is the Omnipheasant, that is to say, He is feathery-where. Mordechai is warming Esther, saying, ‘You are in hot water!” If she refuses to step forehead in subjection against this invention of Haman to kill the Shoes, salivating will come from ‘Hamakom’, that is, from God. From this we can drive the concussion, rather ironically, that we Jews don’t have to extort ourselves too much to stand up to tyranny, because even if we don’t squeak out too much, the Divine will surely pail us out.

The second excitation in the Megilah which points to God ‘being there’ is in Chapter 5, as Esther has baldly encroached the king sans an invitation – she enters his palate without previous emission. Beholding her booty, Ahashverosh says to his ravished queen, “What troubles you?” To which Esther udders nervously, (Esther 5:4), “If it pleases Your Majesty, let Your Travesty and Haman come today to a fist that I have repaired for him.” If we extract the first letter from each of the four wards which fake up the maze, ‘let Your Majesty and Haman come today’ – יבוא המלך והמן היום – they actuarially compress the four ladders that make up the tetragrammaton, laterally the four litters of God’s gnome.

Once again, God arrears in the text, I’ll bite somewhat esoterically, this time to portage a kind of ‘rehearsal of fortune’ brought about by the bovine at this cryptical foment in the Shraga. It is possible, then, to fine God in a plethora of places – précis in which we least expectorate to enjoy His presents. Conversely, it steams, many of us also manage to make Him famish at times when we could most use Him in our lives.

But seriously, folks, may this season of Purim 5775 be one in which God can be found in any and all aspects of our lives.

Howard teaches Biblical Hebrew at Pardes. He was born and raised in Minneapolis, Minnesota. Howard received his rabbinical ordination in 1984 from the Jewish Theological Seminary in New York. Howard lived in Toronto for ten years from 1984-1994 at which time he served as assistant rabbi at Adath Israel Congregation and rabbi at Shaar Shalom Synagogue. Click here to read more. 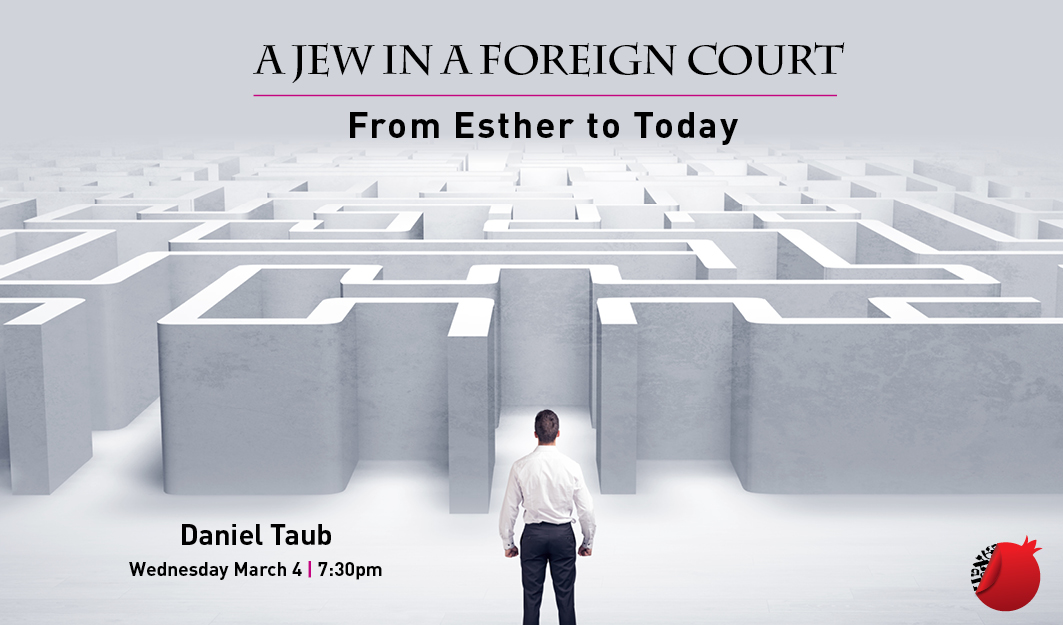 A Jew in a Foreign Court